Animal of the Day - Brown Antechinus 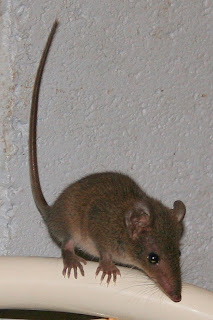 Normally forgotten at all social functions of any worth, Harlowe's attendance at the Julytime Bash was a special point this year. As word of Mallory's party spread, Auntie Clerq grew possessive of those on her traditional guest list. Particularly those she often snubbed.
As such, the eager Harlowe was the last person to receive their invitation to the Julytime Bash. He was determined to bring the most delicious pasta salad he could make, in order to cheer up his newly divorced friend Chan, who would be attending.
Posted by Joshua Goldfond at 9:00 AM