Animal of the Day - Syrian Hamster 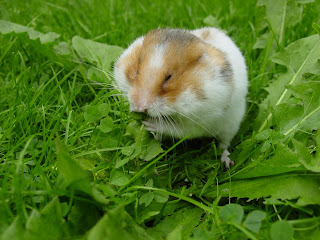 Like so many, Yusuf was given a lot to think about at the debates. On the one hand, Gertie had done a decent job appealing to Yusuf's desire to not be killed. Godwin made a strong point about adding vegetarian fare to the cafeteria, though he had not addressed the controversial "wood chip" issue. The scary fish had said scary fish things, and then some cow with horns talked, but Yusuf mostly slept through that.

But the unicorn was most impressive of all. It had a natural charm, and it instinctively gained Yusuf's trust. Now THERE was a leader!
Posted by Joshua Goldfond at 9:37 AM